The gift of sharing! 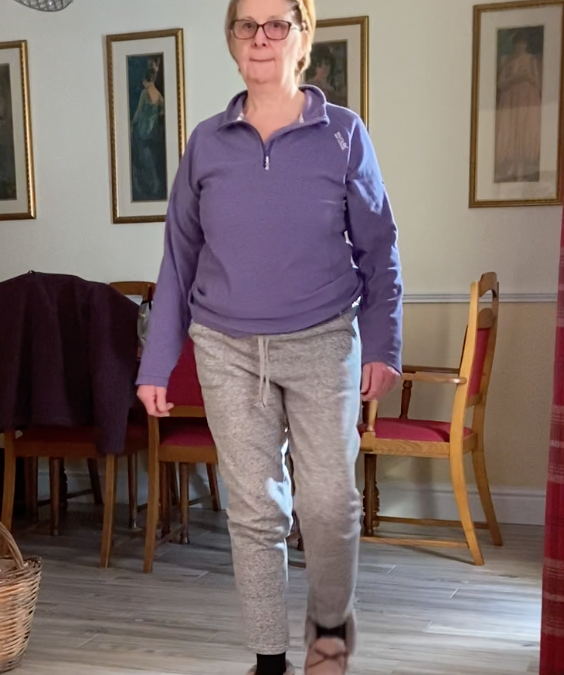 I had to share this with you, so I’ll give the background story as short as possible.

This is my mum, she’s 71 (72 in March) and in 2000 she had an operation and she awoke not being able to feel her left leg at all. She hadn’t had an epidural, during the op they managed to crush her femoral nerve with the clamps.

She ended up having to retire from Nursing early due to being disabled. Before this, she was not only working in the district but banking as an A&E nurse as well. She started nursing at the age of 16, she always knew she wanted to help and care for people. She felt that people she had devoted her working life to, had not only let her down but taken away her life purpose.

The surgeons decided to give her MPFL surgery on her left leg and lots of physio. A total of 6 months in hospital. She worked hard at it, determined not to let it stop her from getting on with life. Lots of up and downs, falls, etc. She is constantly in pain with her knee, hips, back but gets on with it. On top of this, mum also has Rheumatoid Arthritis, Ankylosing Spondylitis, and Crohn’s. She’s on the highest strength pain medication. But she is a tough, strong, and very independent woman.

Fast forward to August 2020, mum and dad get to go away on holiday, they haven’t been in years, 2 weeks away in Bonny Scotland. On the 1st full day there mum fell, her Left knee went from under her and her Left patella had split in half and then the lower half smashed it into 9 pieces, it turned out she fell due to her having a heart episode. She ended up with a double pacemaker and another 2 months in hospital.

She wears a knee brace throughout the day and walks swinging her left leg in a circular motion.

To date, her knee is healed, but she has lots of pain in her knee, so much she couldn’t sleep.

Today I got the urge to take the butt bungi up, we’re in a support bubble so I was able to go and see her. For the first time I felt safe to help her, I knew Mum’s emotion wasn’t going to affect me. I got her to give herself a baseline number she said 3 and also stand up, sit down. She struggles to stand with her weight equal and compensates heavily onto her right leg (the good one)

Whilst sat I got her to blow all the ‘crap thoughts’ into the balloon 🎈 and keep hold of it.

I put the bungi over her, so she didn’t have to step in, she held onto the chair to stabilise herself. She carefully stepped forward until she could feel her glutes, it’s safe to say she hasn’t felt these for many years. Her Butt is completely flat.

I got to let go of the balloon when she felt ready, explaining she was letting go of the crap. She took a deep and let it go.

Then we went through the HAK 2021, during she felt the pain in her left increase even more as we activated her left psoas, I gave her a moment she said to continue, so I did.

Once finished, I said nothing just stepped back and gave her space and time.

She stood for a moment and then looked, noticing that she was standing with her weight equal without her ‘placing it there’, “it doesn’t hurt”, she’s astonished.

After she said, she felt lighter,

She could breathe that her chest felt open a ‘V’ shape.

She then starts to walk, again after a few she notices that her left is bending and she is peeling her foot off the floor, “I’m walking normally and there’s no pain’,

She then sat down, I continued to just watch, she kept looking down at her feet as if they were new, “my foot is further back towards the chair, it’s not extended”.

The pivotal moment was when she took the biggest breath and release, I said to her “that, right there, that’s a step down the staircase”, I told her about this before, and now she understood completely what I meant. Her new number a 7 !!

I texted her later on in the day to see how she was feeling, “great” she said, “the pain in my back has gone too”. The next morning I called her, she had no pain during the night for the first time in 21 years.

I always listen to my gut, these are messages, your inner guidance leading you the way forward.
The video is after (I wished I had got a before but I didn’t) Mum asked me to share this, she said “ if sharing this can help others then do it”